MARINADE
In one bowl mix

I use the Louisiana seasoned fish fry in the blue and white bag.

Then I add a little of the following

Cut the Striper into chunks size of a tater tot or into strips like a fish stick. Let the pieces soak in marinade for about 5 minutes. Then coat with seasoned fish batter and fry at 350 degrees till golden brown.

You will want to do this outside because it will smoke some.

I melt some butter to dip the fillets into, then pull them out and shake off the excess butter. Sprinkle Zatarains Blackened seasoning on both sides.

Cook in a hot skillet with nothing in it. The butter will keep it from sticking to the skillet. You dont want to over cook the outside but it is normal for it to get dark on the outside. Cook the fillets till they are good and white all the way through the thicker part of the fillet. You will find this is good the next day as well either cold or heated back up.

This recipe is for one, 2 pound striper filet, feeding about four people.

How To Work It:

After can of beer is warm, and you have all of ingredients ready, take a cast iron skillet and heat it to a medium-high temperature.

Melt margarine, add spice mix, Worcestershire sauce and mustard. When this bubbles up add shrimp. Stir and shake pan while shrimp cook until opaque and curled. Chop up shrimp into bite size pieces. Add beer, celery, carrot, onion, lemon peel and cook another 3 minutes. Mix in bread crumbs until desired consistency is achieved. It depends on own desires, some like it very moist, some like it drier. Continue to heat on a low heat until fish is ready to be put in oven.

The Ingredients for Fish:

Combine all spices in a bowl and grind ’em up real good.

In a baking pan that has been greased lightly with margarine, or sprayed with no-stick cooking spray, pile stuffing in center and wrap filet around stuffing best you can. Take a couple of toothpicks to hold it in place. Spread margarine on fish and sprinkle fish liberally with spices to taste.

Place in oven for about 30 minutes, or until fish flakes easily with a fork

Don’t be afraid to add or delete ingredients according to your taste preference.

Toss fillet portions in olive oil. Place in bake pan. Combine roasted garlic, lemon pepper, sweet basil and a splash of lemon or lime juice and butter and melt in microwave. Stir and spoon mixture and place over your fillets. Bake at 375 degrees for 20 to 25 minutes, or until fish turns “white.” “Leftovers” make an excellent fish salad for lunch the next day!

Use heavy duty foil. Rub fillets (no skin or dark meat) with Olive Oil and lay them on a bed of Yellow Onions sliced about 1/4″ thick. Squeeze fresh lemon over the fillets. Sprinkle with salt, pepper & Old Bay Seasoning to taste. Sprinkle a heavy coating of Dill Weed on top. Close foil and bake at 350 degrees for about 20 minutes. Check fillets with a fork. When it flakes apart it is done.

Cut striper fillets in to serving size. Toss in olive oil. Splash with lemon or lime juice and coat with Old Bay Seasoning. Cover fillets with several thin slices of sweet onions. Take whole canned tomatoes, half them and place two halves over each portion. Sprinkle lightly with a touch of Old Bay or Seasoning Salt, and sprinkle with sweet basil (fresh or dried). Bake for 25 to 35 minutes at 375 degrees. Serve over rice. (Note:ALL Striper meat is done when the meat turns “white.”) A very impressive presentation at any meal.

Cut Fish into nugget size pieces, or whatever you feel like, just make sure the oil covers and it fits the pot.
Be sure the fish is reasonably dry by draining on a paper towel.

Drop into the corn meal and season mixture and shake.

Remove, shake off the excess meal (optional–set on paper towel for 10 minutes, this helps the meal stick and not immediately come off in the cooking oil).
Cooking:

I use Vegetable oil, enough to cover fillets.

Add the fish, but don’t crowd the pot.

Shake basket lightly right after you put into oil to prevent sticking,

Remove when the fish starts to turn golden brown and float (about 3 minutes).

You want it to be firm and somewhat crisp.

Remove and drain on a wire rack.

Preparation of Fillets and Marinade:

Make Marinade:
In a bowl combine marinade ingredients, stirring until brown sugar is dissolved. To marinade add olives, bell peppers, and onion. Season fish with salt and pepper and in a bowl toss with flour to coat, shaking off excess. Line a shallow baking pan with paper towels. In a large heavy skillet heat 3 tablespoons oil over moderately high heat until hot but not smoking and saut fish, 6 pieces at a time, turning once and adding remaining tablespoon oil to skillet as necessary, until golden on both sides and just cooked through, about 6 minutes. Transfer fish as sauted to paper-towel-lined pan to drain.
Transfer fish to a 13 – by 9 inch shallow baking dish and pour marinade mixture over fish, spreading vegetables in one layer. Marinate fish, covered and chilled, at least 1 day and up to 3.
In a large saucepan of boiling salted water cook beans 3 minutes, or until crisp-tender, and drain in a colander. Refresh beans under cold water and drain. Beans may be cooked 2 days ahead and chilled in a sealable plastic bag.
Remove fish from marinade mixture and add beans to dish, tossing to coat. Transfer mixture to a large deep platter and arrange fish on top.
Serves 6.

Preparation of Fillets: Remove all the red meat.

Cut into chunks and soak in a solution of cold water. The recipe for a quart of the solution is:
1 cup of white vinegar
Supersaturate the solution with salt
Soak for at least 1 hour.
Rinse and drain.

Dip fish in an eggwash and roll in mixture of:
1 cup of flour
1 cup of cornmeal
salt and pepper to taste

Prepare freshly-caught striper fillets by cutting into one inch chunks. Smaller fillets can be cut into thirds.

Remove red meat from larger fillets during preparation process. The key is to have all chunks of uniform thickness for even cooking.

Beat egg until scrambled and add fish. Stir fish with fork until evenly coated with egg.

Pan fry in hot oil (375) until golden brown. Turn to brown on opposite side. When brown on both sides fish is ready to eat.

Toss striper fillets in olive oil and dredge in dry cajun or blackened seasonings. Saute in skillet with a little more olive oil on a medium to medium-high setting until fish turns “white.” This takes approximately 6 to 10 minutes per side. It is best to just turn the fillets once halfway through cooking.

What to Bring Fishing?

20 Years Lake Texoma Experience
Top of the line gear
Coast Guard License
Texas and Oklahoma License
Fully Insured
Filleting and Bagging Your Fish
A Fun Day You Will Never Forget
A Guarantee You Will Catch Fish!!! 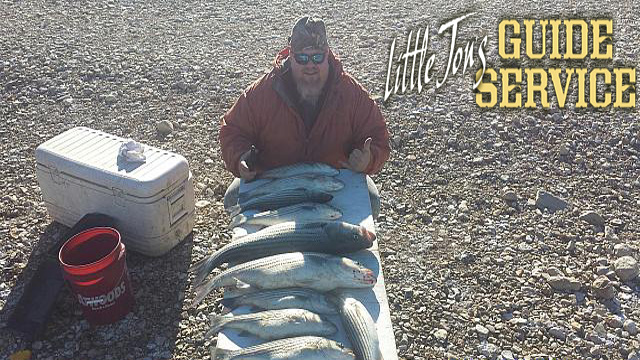